How do you choose your beanbag filling? One of the most important decisions you have to make in choosing the right filling for your cover. Should you go for a bean bag filling or a foam filling? If comfort, support and structure is a priority – then the decision is a no-brainer. Choose polystyrene bead bean bag filling.

Beanbag covers can use either of the two fillings, polystyrene or foam pieces or solids. The Australian designers of Ambient Lounge’s bean bag fillings prefer  high quality polystyrene for the following reasons:

They are small and dense.

We have improved the fillings themselves (from the mass market variety) to make them smaller and denser. This way, they don’t lose their form or bouncy effect very quickly. Have you noticed that Kmart, Target or Big W filling can sometimes sag quickly? The beads are larger and less dense, thats why. It’s actually more costly to keep topping up than buying good quality beads from the beginning.

Foam is even more spongy and can also compress. Foam such as polyurethane, that is sold into shredded form, may lose its comfort much faster.

Micro polystyrene beads are actually a lot easier to deal with.

This is especially true if you go for Ambient Lounge bead fillings that already come with a funnel-based system. It eliminates scattered beads on the floor and speeds up the filling process to less than a minute. That is not a technology you can use or apply with the foam filling, particularly when it’s already shredded. Before you know it, the entire area gets a little messy and, worse, little very small babies, animals or kids may fancy them and eat the foam! Thats dangerous.

You get more comfort and satisfaction in a bead filling than a foam filling.

To be fair, both foam and Polystyrene offer a degree of comfort when you’re sitting or lying down. But the latter provides more of it. This is because bean bag fillings don’t immediately sag. They beads follow the shape of the body, but when you stand up, they bounce back to the sofa shape. Meanwhile, the foam fillings can be so soft that they will stay compressed and make you feel uneasy and close to ht floor (if not sitting on the floor). You may even have some trouble standing up.

There are better regulations with bead fillings than foam fillings.

Some countries like Australia have created strict laws with regard to the design and use of small Polystyrene fillings in beanbags. These include adding a tight locking system that prevents any child from opening, crawling, or ingesting the beads. These laws only enhance the standards in the manufacture and sales of bead fillings in the market.

Isn’t Polystyrene Bad for the Environment?

Some people have expressed concerns over the use of polystyrene in beanbags—and rightfully so. Polystyrene, as a by-product of petroleum, doesn’t decay, only adding more garbage into the landfill and increasing land pollution. Worse, the manufacture of such fillings may include CFCs that have been proven to damage the ozone layer and increase global warming.

Over the last few years, though, more manufacturers have learned to become green. For instance, instead of CFCs, they make use of carbon dioxide as a blowing agent. Organizations that oversee the proper disposal of the polystyrene beads are also in place and are teaching users how to recycle them.

Have you ever experienced sitting on a beanbag and, while you’re thoroughly enjoying its comfort, asking yourself, “Why is it so soft and feel so good?” “How does it follow the shape of my body?” “What’s really inside a bean bag?” The answer is simple: bean bag beans are small balls of polystyrene.

Polystyrene may sound like an alien word for you, but it’s a product of the industrial revolution – designed for packaging, building and insulation purposes . Polystyrene as we know it rose to prominence during the Second World War. Back then, the war (and its carnage on factories) had prevented the production and supply of many essential supplies, including rubber. Scientists and engineers had to fit the function of rubber, and think out of the box to tap into raw materials. They discovered styrene.

Styrene is a by-product of petroleum, which means the raw material for petroleum has to be synthesized first before you can have styrene. Interestingly, it’s also found in certain types of food, especially spice cinnamon.

Styrene was one of the major components in the manufacture of synthetic rubber. Most of all, it’s the foundation of polystyrene.

How It Figured into Beanbags

We aren’t really sure on how someone came up with the idea of putting polystyrene balls into a furniture cover – creating the modern day bean bag in the process….but we can take a pretty good educated guess.

Polystyrene beads or “bean bag beads” were manufactures as in tiny balls so they could be drilled into cavities of hollow walls in a home, then fused so they would be an insulator. Basically they were a cheap way to make your home cooler in summer and warmer in winter. We think that somebody had probably noticed that these large qtys could be transported in large bags (much like rice bags) and that if you sat on one of those bags – it was damn comfortable! A Newton and apple moment for bean bag furniture perhaps?

But based on our research, the earliest knows “beanbag chair” is the Italian Sacco. It was iconic in its day. The Sacco was complemented by a PVC envelope that’s both flexible and transparent – the shape very simple and much like a teardrop. Though a crude form of furniture, the Sacco was high on comfort… but fairly low on style.

Bean bags were therefore an initial flash in the pan – and dismissed as kitch or kids furniture in the 1980’s until many years later Ambient Lounge pioneered the designer bean bag with form, high quality fabrics and the Funnelweb patented system.

So let’s get back to the polystyrene balls we call bean bag beans. Polystyrene comes into two types: foam or rigid. The ones used in beanbags are the foam ones with elasticity and the legendary bouncebackability. That’s why they’re very soft and tend to follow the shape of the body when you sit or lie down on them.

The smaller the beads the better, mainly because they last longer and retain their bounce. Large balls are less dense and while they are comfy at first, they get squashed quickly and lose their sag.. that’s why your bean bag needs “topping up” and is more evident in bean bags with shape.

The rigid ones, on the other hand, are utilized in creating food packages including coffee cups and cheese containers.

What other uses for Polystyrene?

You can actually find Polystyrene everywhere: when you order your cup of latte in a coffee shop, when meals are delivered from your favorite restaurant, in your Esky, under the ground of major building constructions, in boats or when you’re looking for a cheap option for containers and lids for food.

Yup, it’s in high demand in the world of food. Why is this so? First of all, polystyrene is considered very sanitary. In fact, experts find poly styrene products a lot cleaner than reusable utensils, plates, and cups, those that are often rinsed in warm water and dish soap. They prevent the growth of bacteria and harmful microorganisms that can lead to premature spoilage of the food.

They provide excellent insulation. That basically explains why coffee cups and eskys are made from Polystyrene. What’s more, they work just as well when you’re trying to maintain the food’s cold temperature

Polystyrene is a very safe material to use and handle. It doesn’t emit any suspicious gas or chemical when exposed to varying temperatures. It doesn’t require a lot of raw materials to produce, and it can be mass produced so it’s sold at a very affordable price.

Most of all, it’s recyclable, which is also recommended by experts since it doesn’t disintegrate very well over time.

But best of all, you can sit on it!

Well, there ya go. We know it’s not the most exciting subject in the world but bean bag beans are little balls of joy, loved by millions, if not billions of households the world over.

If you still think about bean bag filling the old, messy Kmart/Target/BigW way then stop! It’s time not to spill the beans.

Ambient Lounge invented the Funnelweb filling zip and tip system in 2005 so that bean bag filling can be easy.

We are all too busy to be bothered with Ikea style construction projects and cleaning up for hours afterwards. So why not try the patented Funnelweb (currently only compatible with Ambient Lounge and PiMP branded bean bags).

As seen on Channel 9’s The Block, the Funnelweb  is a revolutionary system (designed by Australians) that allow you to fill and unfill bean bags in a matter of seconds.

For more information please give us a call on 1300 707 121 and we’ll be happy to help with your bean bag filling requirements. 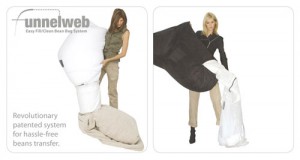